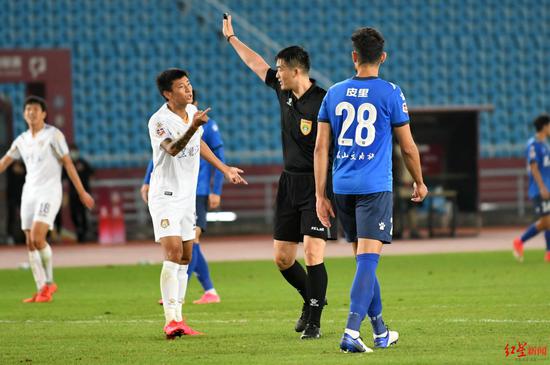 After 14 rounds of the Chinese Super League, 6 teams have filed a total of 9 appeals, accounting for 8.04% of the 112 games. Although the complaint did not change the results of the game, the relevant clubs still expressed their attitude:

1 In the third round of the Chinese Super League, the Dalianians lost 1 to 2 against Jiangsu. After the match, the Dalianians said that in the 18th and 81st minutes of the match, two fouls of the same nature occurred, but the referee team gave different scales. For the penalty, the Dalian native filed a complaint with the Football Association;

2 In the 4th round of the Chinese Super League, Shenhua drew 2-2 with the Dalian People. The game entered the final stoppage time. Long Dong fell to the ground during a scrimmage with Qian Jie in the penalty area. Fu Ming failed to listen to the VAR assistant referee's opinion and was met by Feng Xiaoting. After many Shenhua players protested, they still very firmly awarded Dalian a penalty. In addition, Yu Hanchao dribbled the ball into the penalty area, the opponent tackled from the side and behind, and Yu Hanchao fell to the ground in the penalty area, but the referee did not indicate and did not watch VAR. Shenhua filed a complaint with the Football Association, hoping to have a unified standard;

4 In the seventh round of the Chinese Super League, TEDA lost 1-2 to Wuhan Zall, but the corner kick for the second goal made by Wuhan Zall probably shouldn’t exist from the slow motion playback, because it was the Wuhan player who hit the bottom line. TEDA’s goal kick was supposed to be fined, but neither the referee nor the line referees saw it, which eventually triggered a chain reaction, which caused TEDA to lose the ball in this round and was reversed. TEDA filed a complaint with the Football Association;

5 In the 7th round of the Chinese Super League, Yongchang drew with Guoan 2-2. In the match, Chinese player Bakambu fell to the ground and got a penalty. In a similar situation, Yongchang player Oscar did not make the same penalty. Yongchang also proposed after the match. Appeal

6 In the 9th round of the Chinese Super League, TEDA lost 1-2 to Chongqing Modern. TEDA missed a penalty kick in the 87th minute. However, Chongqing goalkeeper Deng Xiaofei was suspected of moving ahead. However, the referee did not impose a heavy kick. TEDA filed a complaint with the Football Association. ；

7 In the 9th round of the Chinese Super League, Shenhua drew with Shenhua 0-0. At the last moment of the match, Shenhua foreign aid Mali was sent off due to a dispute with Shenhua players in the bench area. After the match, Shenhua's bench was enough to have a race against Mali. File a complaint to the Football Association for discriminatory remarks;

In the 11th round of the 8th Super League, Guoan drew with China Fortune 3 to 3, Guo Quanbo knocked down Malkang and was sentenced to a penalty kick. Guoan complained to the Chinese Football Association after the game;

9 In the 13th round of the Chinese Super League, SIPG defeated Guoan 1-0. Guoan believed that Vieira was tripped in the penalty area and the referee did not give a penalty kick. In addition, Guoan’s goal was not offside. Guoan complained to the Chinese Football Association after the game;

Regarding how the complaints of the Chinese Super League clubs are handled, Yan Chengbin told the Red Star News reporter: “According to the process of the Chinese Football Association, controversial penalties will be submitted to the jury of the referee committee. The jury is an independent body that will review the penalties. Whether the qualitative judgment is correct or not, the decision of the panel is also the final decision."

Regarding the refereeing issue that caused the conflict between the two teams, Yan Chengbin believes that there are many reasons. He cited the game between Kunshan FC and Heilongjiang FC as an example: "The penalty kick of Kunshan FC, I personally think it is indeed a penalty. There will be conflicts on the court. I guess it has something to do with the accumulation of the whole game. There are several possibilities for conflicts. One is that the player's mentality has changed, and the dissatisfaction with the referee or the opponent player has accumulated to a certain extent on the court. To the extent, this is also the old problem of Chinese players. At the same time, there is also the mentality of referees. Referees on the court should pay attention to whether the mentality of players or coaches has changed. If they have psychological knowledge, they may avoid this from happening."

Yan Chengbin also believes that the blow of Chengdu Xingcheng’s goal is indeed a misjudgment, but he said that it is indeed difficult to judge the ball without the assistance of a video referee. “Look at the top of the two players from 30 meters away. , The assistant referee is very difficult. While observing the challenge, he also observes the offensive players' running positions. In this game, the assistant referee paid too much attention to the two players' challenge and forgot to look at the runners. The assistant referee did not raise the flag immediately. He himself has doubts. FIFA requires referees to put down their flags when they are in doubt, but this is also a mistake in a normal offside penalty."

Yan Chengbin also said: "There have been many complaints from clubs this year. This is first of all clubs' rights. On the other hand, it is also a question of the mentality of our football environment. We cannot correctly understand the outcome. FIFA has the principle of fair play and has always emphasized how to treat it. Winning and unconditional obedience to the penalty is also a requirement for coaches and athletes in fair competition. At this point, we are not very good, and the mentality fluctuates too much, which has caused a lot of controversy. But from the overall judgment, I Personally, I feel that these disputes and penalties are within the scope of the rules, and some of the scales may not be exactly the same. But for us so many referees, it is almost impossible to be exactly the same as the machines. The Chinese Football Association also requires the referees to be as close as possible. "

He also specifically mentioned that we also have a lot of deficiencies in the popularization of rules. "As a referee, I think the complaints made by some clubs are inexplicable. I feel that as football practitioners, they don't understand the rules at all."

Yan Chengbin believes that it is not just the players and referees that need to be further strengthened in professionalism. If the penalty is to be more accurate, all aspects including media, broadcasting, and technical processing need to be strengthened. He cited the Premier League as an example: "After a match in the Premier League, if there is a complaint against the referee, the video will go to the Disarmament Committee or the deliberation body immediately, and the result will usually be announced in a few hours. But our side I really can’t do it. After a game in the Super League, the review team may not be able to get people together on the day. This is not just a problem with the Football Association, but also the technical department, video production department, and broadcast department."